Currently we only accept long term visitors. A negative ATK test which is less than 3 days old (or ATK test on arrival) must be provided at arrival, for approval by the head of the village (Moo 5, Li, Lamphun, Thailand). Please contact us via e-mail to stay notified.

Blue and white taxi from Chiang Mai to Li Lamphun

You can cycle from Chiang Mai, the mountain route is very nice.

Video with directions and signs (the dirt road is paved now) and remember it is Wat Luang Gau (Not Wat Li Luang): 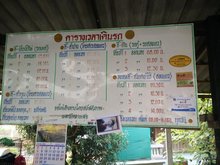